"Dass war ein Vorspiel nur, dort wo man Bücher verbrennt, verbrennt man am Ende auch Menschen."
"That was only a prelude; where they burn books, in the end they will also burn people."
Heinrich Heine, 1821[1] 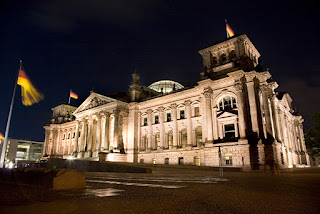 September 2005: I am alone, walking around a huge, open-air urban museum, with darkness descending and cold setting in. Berlin has been re-built in the years after the wall, and I am visiting the city for the first time and expecting to find it cold and clinical, a city that has covered over the traces of its disturbed past. Instead, there are fissures and cracks everywhere; the job is only half-complete, and no one seems to mind. In the daytime, the reconstructed German parliament building looked imposing, a projection of the brash confidence of this reborn country. At night, in the eerie quiet of the almost deserted city centre, it looks faded and fragile. There is hardly anybody around.


August 1914: Kaiser Wilhelm stands on the balcony of the royal palace, announcing that Germany is now at war. The cheering crowd stretches all the way back to the Brandenburg Gate, over a kilometre away. The kaiser tells them: ‘Ich kenne keine Parteien mehr, ich kenne nur noch Deutsche!’ Only Germans… These words echo through the years that follow. The Germans have a mystical sense of their collective power, the result of many centuries of division and weakness. Leaders that have been able to unify them, have also achieved great victories against overwhelming odds: Charlemagne, Frederick the Great, and Bismarck. For the first time, the Great War unites the German and Austrian empires against a motley alliance of France, Russia and Britain. But now the story goes wrong. Four years of bloody sacrifice end in retreat, starvation and humiliating surrender. The search is on for a scapegoat to prove that collective German power was not really defeated, but betrayed by an enemy within.
January 2016: I teach my students that the German Jews were persecuted under the Third Reich for historical reasons, to do with Christian belief, legal discrimination and patterns of migration. But they were also simply in the wrong place at the wrong time.  In Germany, the Jews are concentrated in sufficient numbers to provide a credible scapegoat, but not enough to be able to organise collective resistance. I ask my classes to estimate the percentage of the German population that identified as Jewish in 1933. They always guess somewhere between 15 and 40%. The true figure is smaller than 1%.
May 1933: The revolution has begun, and the time has come to purify German culture, eliminating all ‘undesirable’ reminders of a corrupted past. In Berlin, the purification is led not by the Nazi high command, but by enthusiastic young students, who raid their university library and remove any examples they can find of ‘decadent’, ‘un-German’ literature. The books are thrown onto a huge bonfire in the open square outside, whilst a crowd of about 40,000 cheer and sing patriotic songs. Goebbels is present to give a brief speech: He tells the students – ‘you do well in this midnight hour to commit to the flames the evil spirit of the past. This is a strong, great and symbolic deed’. It is raining. 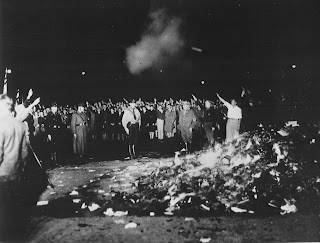 ﻿﻿
September 2005: It’s getting really dark now, and I am starting to get lost. I have walked through the Holocaust Memorial, and back up to the site of the old royal palace. The Bebelplatz, where the book burning took place, is a hundred yards away. On the other side of the bridge stand the city’s museums, huddled together in solidarity, wounds tightly bound. I sense a crowd gathering behind me. They would like to apologise, to explain, to undo, but are silenced by the vivid evidence of their own destructive power. What’s done is done. I turn around. There is no-one there.
November 1938: Kristallnacht – 'the night of broken glass'. All over Germany, synagogues are attacked and many are burnt to the ground. Jewish shops and property are ransacked, and some Jews are killed. In some cases, locals and police intervene to prevent violence. Some join in, encouraged by anti-Semitic propaganda, opportunism, or a combination of the two. The vast majority, however, are silent observers, either in the streets or from behind their living room curtains. Later, Joseph Goebbels, Nazi propaganda minister, ascribes the violence to the ‘healthy instincts’ of the German people. However, the government is inundated with reports that the public are less supportive than expected, with some expressing anger at the extreme measures taken. Hitler bans further reporting of the events of Kristallnacht in the national press. The Jewish population are made to pay the costs of repairing the damage: a total of one billion Reichsmarks.
June 2015: When you peer inside the memorial at the Bebelplatz, squinting to see the rows of empty shelves, it is just possible that you catch a glimpse of your reflection on the glass panel below you. The architect has a subtle message here: we ourselves are no different from those who burned books and buildings, or stepped aside to allow the destruction of an entire race living in the heart of civilised Europe. But on a summer’s day in Berlin, the warning is easy to miss. The city shines with a new optimistic glow – it is ten years since my first visit, and in the intervening years Germany has grown in confidence and political clout. The city is still a museum, but the presentation is slick and more detached. Except at night, when the Berliners and the tourists clear out, and the ghosts are allowed to walk.


[1] The quotation appears next to the installation by Micha Ullman, below. Heine was a German Jew, writing about the destruction during the Spanish Inquisition. His  works were amongst those burned in Berlin on 10 May 1933.