The Illusion of Consensus

For two decades, British politics seemed to be dominated by a simple and pragmatic political consensus: voters wanted freer markets, devolution of powers, social liberalism and a strong role for Britain on the world stage. In reality, the consensus never existed, and its fragility has been brutally exposed in the last twelve months. Support for market intervention, centralisation, social conservatism and isolationism have probably never been higher. It may be depressing for liberals like me, but since we have been very good at telling others that they need to adapt to the new world order – to sink or swim – maybe we need to start taking our own advice.

From the perspective of 2017, this consensus is already looking like a relic, but two years ago the trajectory of British politics seemed to be firmly established, and almost irrevocable: the major parties might squabble around the margins, but by and large they occupied the same political territory. Tony Blair’s three election victories provided the template, and his self-styled ‘heirs’ in the Conservative Party responded by modernising their party. Like Blair, David Cameron and George Osborne upheld socially and economically liberal values; they supported gay rights, free(ish) markets, private involvement in the provision of public services and, of course, they wanted Britain to remain a member of the European Union.

In retrospect, the strength of this consensus was also its weakness. Between 2005 and 2015, millions of ‘core’ voters shifted their political allegiance away from the main parties. The Tory right migrated angrily to Ukip, whilst voters to the left of the Labour Party grew frustrated with the triangulations of its leaders and sought out a more full-throated committed to the rhetoric, if not the practice, of socialism, which they found in the Green Party in England or in the nationalist parties of Scotland and Wales. Many socially conservative Labour voters, especially in the north, shifted to Ukip. The Liberal Democrat Party, once a safe haven for the ‘protest voter’, paid the price for entering a coalition with the Conservative Party and suffered a near-collapse in 2015.

The voters’ flight from the consensus of the Blair years was heavily masked by the UK’s anachronistic voting system, which exaggerated support for the traditional parties to an almost embarrassing degree. In May 2015, Ukip and the Greens won nearly five million votes between them, but won only one seat apiece. Nevertheless, Cameron’s unexpected majority made the shifts in political gravity over the previous decade seem largely superficial: it appeared that most voters would still return to consensus politics when called upon to do so. But this ignored the fact that Cameron had failed to put forward any positive agenda in 2015. Instead, he focused on the threat of an unpatriotic Labour-SNP coalition that would ‘bankrupt Britain’ and the promise of a referendum on EU membership that he personally opposed. Lacking enthusiastic support from his own members, let alone the country, his victory was dependent on a toxic combination of weakness and fear.

Neither was there much enthusiasm for the political alternative offered by Labour. Left-wing voters were appalled at Ed Miliband’s attempts to compromise with socially conservative voters by accepting the freeze on benefits and putting the promise to ‘control immigration’ on campaign mugs. There has probably never been an election in which the candidates had so little to offer their political activists or the wider electorate; both leaders campaigned on the basis of who they weren’t, and the result that there was little sorrow over their respective departures in 2015 (Miliband) and 2016 (Cameron).

And what has become of the ‘centre ground’ that both men were so diligently striving for? It has evaporated beneath their feet. Support for membership of the EU was, by 2016, the only part of the old consensus still standing, and it collapsed entirely once sufficient numbers of Remainers accepted that there was little hope of overturning the referendum result. This year, the Liberal Democrats have appealed directly to ‘Remain’ voters, and have found themselves struggling to stay relevant in an election campaign that has moved on.

In 2017, the two main parties have achieved what once seemed impossible: playing to its ‘core vote’ whilst also making electoral gains. Labour’s campaign has been an unheralded triumph. A manifesto that promises large spending increases and government intervention in the economy at almost every level will enable them to hoover up votes from Liberal Democrats and the Greens on June 8th. On the right, Theresa May’s programme offers Conservatives all they have dreamed of: hard Brexit, grammar schools, fox hunting and fiscal restraint. Her personal brand has been tarnished by wobbles over social care, but the wider message will still (probably) carry her to an increased majority.

Both platforms have done more than simply challenge the old political consensus: they have buried it. Labour may change its leader after this election, but they will certainly maintain the political course that he has set. Meanwhile, Cameronites in the Conservative Party are on the way to becoming as rare a breed as Labour’s ‘Blairites’: when Theresa May sacked George Osborne last year, she reportedly advised him to spend some time getting to know Conservative voters before returning to the political fray. Instead, he has become the editor of the largest newspaper in London, a city which remains a sturdy outpost of the old consensus, but is suddenly perplexed to find itself disregarded by the provinces: an enclave, rather than a hub.

As the process of leaving the European Union proves to be more intricate, more painful and more embarrassing than voters have calculated, the positions adopted now will harden further: scapegoats will be demanded, and unrealistic goals set. But this election may yet only mark the transformation, rather than the death, of Liberal Britain. If liberalism can move from orthodoxy to insurgency, then it can still revive the country’s prospects in the twenty-first century as surely as it did in the twentieth. Shorn of the constraints imposed by the need to maintain a non-existent consensus, liberalism can regain its self-confidence and assertiveness, and reclaim support from across the political spectrum. Macron points the way: en marche! 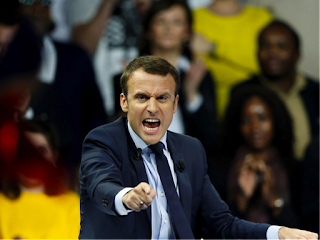