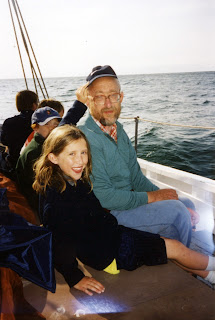 ‘I want us to be doing things, prolonging life’s duties as much as we can. Let death take me planting my cabbages, indifferent to him and still more of my gardens not being finished.’

Michel de Montaigne, Essay XIX: That To Study Philosophy Is To Learn To Die

Growing up with dad was a world without straight lines. Intellectual worlds and academic disciplines fused, merged and overlapped; time bent round corners; an average conversation included, in no particular order, the acceleration of the universe, the extinction of the dinosaurs, Greek myths and Neolithic man. As dad’s passenger on this meandering journey through time, I usually resolved simply to take a warm coat and enjoy the scenery, since there was no guarantee of arriving at any particular destination. Whereas my mum tended to hurtle straight towards the next imminent event, dad’s existence took the form of a parabolic curve that approached and passed away from a straight line, without ever quite touching it. Everything was a ‘project’: a work in progress, and the interest was to be found in the activity rather than the outcome. I can remember sitting with him as a little boy in his shed in Lacock, watching him carve and sculpt wooden figurines. Whilst I played with his tools, he worked methodically on each piece. If I admired one, he would delight in telling me what insignificant, pointless tat it was, which understandably I tended to find rather confusing. How could an object on whose creation he had laboured so intently possess such little intrinsic worth? The artefact from which he derived the greatest pleasure was his Lira da Braccio, made in 1999 as part of an MA course. This was my dad’s ultimate labour of love, but if you tried to ask him about the instrument itself, you would not detain him very long: the strings were bought at such-and-such a place, dirt cheap. The wood was bog standard, and the instrument could be mass produced without compromising its artistic value one bit. Ah, but the discovery and the making of it, that was the joy: the process of re-imagining the instrument from a medieval painting and researching its origins and design; the hard work of fitting strings to bridge, and bridge to board, and all together, of tuning it and finding a suitable bow, all in pursuit of nothing less than the perfect sound; that was a worthwhile subject. Get him on that, and he would be gone for hours, in search of the ‘music of the spheres’, via Ptolemy, Leonardo da Vinci and unnamed musical prodigies in the Mongol hordes of Genghis Khan.

Dad knew instinctively that all the important things in life were the result of collaboration. Progress was the fruit of the efforts of many enthusiasts, often working as individuals but sharing a collective goal. He loved discussing the so-called ‘great men’ of history, but try as he might, he could never quite persuade himself that change was really directed by a few lone, titanic figures. Instead, dad’s natural irreverence got the better of him: he liked nothing more than to find the truly human aspect of key figures in history, and discover their true motivations, how far they succeeded, and what they sacrificed in the process. In studying politics and history, Dad relished the banality and folly of rulers who presented themselves as ‘god’s representatives on earth’. I can still recall him shaking with laughter at Charles Dickens’ two-page rant about the snivellingly useless James I, dribbling, fawning and snoring his way around his lavish and luxurious court, wearing a padded jacket because he was terrified of being stabbed by one of his supposedly adoring subjects. Similarly when he spoke about the lives of great artists and musicians that he admired, dad would explain to me that genius and creativity was often the product of ambition, carelessness, greed, or simple accident. Nothing delighted him more than the fact that the Renaissance was nurtured at the corrupt and highly dangerous court of the Medicis in Florence: It was a very human paradox that fascinated and entertained him throughout his life.

Unpretentious and irreverent, dad was the ideal conversation partner. His kindness and integrity invited honesty. If you told him that you found his ‘theory of everything’ unconvincing, he would laugh his head off, relishing the irony that a supposedly holistic theory to explain the workings of the universe was not in itself universal, but particular to his own way of seeing the world. 'There are more things in heaven and earth than are dreamt of in your philosophy’. Dad loved studying the worlds of scientific endeavour and intellectual progress, but, Hamlet-like, he also viewed human activity in the wider context of a universe without a beginning or an end. The particles of dust that form the temporary you and me will endure when our physical presence has long gone; death itself, in this context, loses its sting, and becomes a curiosity. It would have warmed Montaigne’s heart to see the old man in his chair, thinking seriously about who he was and where he was bound. Death became dad's last great theme, his final journey. Shortly after he died, I had a dream about him that revisited a familiar scenario from my childhood. I was sat in the back of the car, on the driver’s side, directly behind my dad. He was in full swing, holding forth on one of his universal theories about life, the universe and everything. Eventually, I had no choice but to interrupt him with a suitably blunt question: ‘Dad, aren’t you dead?’ Predictably, he found this possibility very amusing. ‘You tell me, sir’. A wry smile. ‘Isn’t this interesting?’, and before I knew it, he was off again, in pursuit of the nature of existence, the possibility of immortality, and the whereabouts of the human soul. Sensing that he could wax on this theme for a while, I once more felt obliged to cut to the chase. ‘You are gone, dad, and I am swamped with guilt, regret, pain and fear. What should I do?’ And then one of those real smiles, beyond reassurance, beyond love. A smile that made waking up seem like the next step, rather than an irrevocable loss.

What was important to dad was the stuff you couldn’t fake: a love of knowledge for its own sake and a willingness to wander over uncertain ground. He said: ‘It’s a pinball world out there; follow the head, the heart and the hands’. I could live to be a hundred years old and never receive better advice. Life, in all its baffling complexity and heart-breaking simplicity, is to be lived. Relish the sheer strangeness of it, the implausibility of the whole set-up, the miracle that you are you and he was he, and for a little while, your worlds approached one another like the parabola and the un-intersected line. In Hillsborough, someone watched dad as he crossed the town's main road, his slow and determined plod baffling local pedestrians and infuriating motorists. ‘His little feet were going, and wherever he was going, that was where he was going’. Slow as he was, you couldn’t catch him if you tried.

‘This above all, to thine own self be true’. They will ask me: What was the journey like? Why did it matter? Where did it lead? Will you walk with him again? I will answer: he was a man of enduring patience, curiosity and kindness, and such things are not so easily buried.

How much longer do I have left? That is the question. I could stay here for all time, and recount to you what my dad has meant to Lizzie and I, what we will miss, and what we will pass on. During his final visit, we both took the opportunity to tell him ourselves. This man who has gone, of such dignity, and courage, and compassion and integrity; I will find him in the curves, in the uncertainties of life: his is the voice that says: ‘don’t give up trying to understand who you are’. Know thyself. I have a few seconds left… and the curve of the parabola begins its slow onward journey away from the line it almost touched. So near, yet so far. ‘Go, bid the soldiers shoot’.